Egg Fuse is on the Market!

Dr. Dan's Egg Fuse has finally been released after over 8 years of research and development!  If you're tired of whole-hatch predation by passing assailants, the Egg Fuse may increase your fecundity with a simple time-release strategy statistically shown to increase offspring survival rates by up to 70%.

How Does it Work?

Dr. Dan's Egg Fuse is exterior-protected by a proprietary water resistant waxy barrier, encapsulating a nutrient-rich polymer.  Once installed, eggs are deposited on a flat, water resistant surface* and simultaneously overlaid with both the feed polymer and protective barrier.  Egg spacing is determined in advance by juvenile growth rates, providing an even separation of instars.

Fuse is triggered by the simple deposition of an enzyme at the trailing end, which slowly breaks down the feed polymer releasing both water and nutrients to each egg in sequence.  Installations are available for a 10-, 17-, and 30-day fuse life.

Is the Egg Fuse Painful?
Dr. Dan's Egg Fuse will save the lives of many r-strategists' offspring.  The value of the lives saved cannot be assigned a trade value.  That said, the Egg Fuse does involve an internal abdominal modification accompanied by some discomfort.  This is offset by a reduced price during the initial product release.  An external solution is currently planned for early 2012 release (late 2011 for soft-integument individuals).


Notes
*Surface must be clean and free of dirt, oil, or other impurities which may affect adhesion of protective barrier on both sides of fuse.  Flexibility of surface may result in portions of fuse barrier separating from surface prior to completion of fuse cycle. 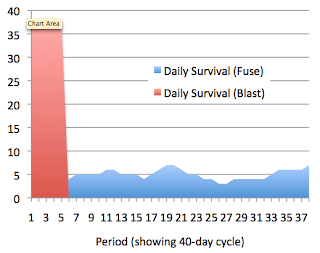 Applied to the populations is a single daily predator with an unlimited appetite and a preference for a single instar (indicated by its length in millimeters).

The table below demonstrates a sample data set which can be regenerated with different prey size targets and similar results.

How to Read the Sample Data

For column 1, consider each period a day, and for column 3, observe that one egg hatches per day.  On Day 1, therefore, there is a single larva at the 1mm size.  On Day 2, the first larva has grown to 2mm, while a new larva has hatched at 1mm.

Each day a predator visits the hatch site and its target prey size is shown in the blue column.  The green column headers highlight the length of all larvae present on a given day.  When a predator visits and its Prey Size Target matches the length of a larva present in the population, that larva disappears (shown by a zero).  The table cells illustrate that with Dr. Dan's Egg Fuse, there should never be more than one larva of a single size on any given day.

The Prey Size Target is randomly generated within the range of instar sizes, and repeated number regeneration yields similar results.  Not shown is the data table for the Blast method, but this datasheet is available upon request.
Posted by Mermithid Truth at 9:01 PM